Bonds have been hammered by selling pressure in 2021–especially in February.  When it comes to many parts of the financial market, and especially bonds, strong momentum in one direction builds a case for a technical bounce in the other direction.  In other words, the more bonds sell, the more traders consider them “oversold,” and the greater the odds become of at least a day or two of gains.  We saw an example of such a bounce last week, but it didn’t last.  Now that bonds have embarked on another sharp selling-spree, how soon is too soon to look for the next technical bounce?

First off, let’s check in with the trend and yesterday’s big breakout. 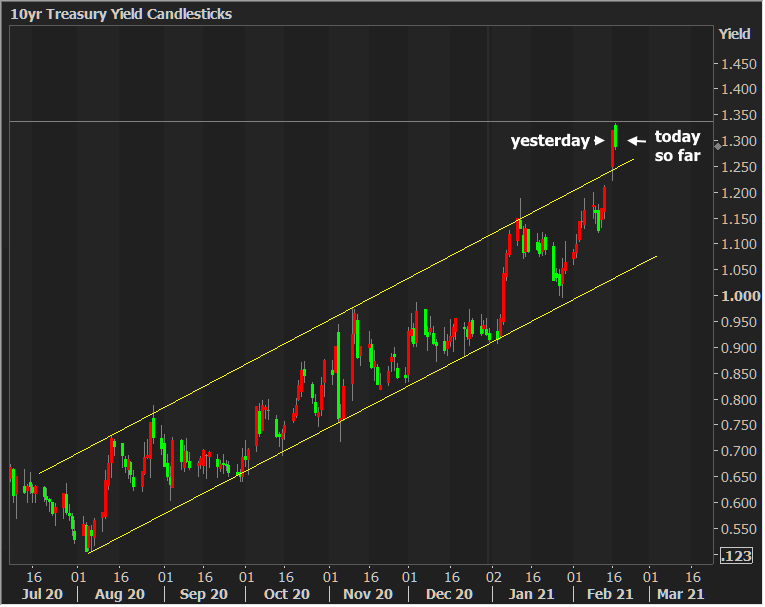 From a technical standpoint, this is not good.  I mean… it hasn’t BEEN good to be operating in a fairly relentless uptrend for 7 months, but considering yields started at 0.5, and that mortgage rates weren’t paying attention, it was an easy transgression to forgive and/or accept.  We generally don’t want to rush into an optimistic stance too quickly when a long-term trend channel is breaking, but we’ve already seen enough weakness to open the possibility of another bounce.  The bouncing game continues!

First off, please understand that when we’re talking about “bounces” in this context, it could be as simple and underwhelming as last week’s token correction.  That warning jives with our general approach to risk-taking in the mortgage market right now: it should only be done over very short time horizons and in the pursuit of small victories.

With the warning out of the way, why might we be on the lookout for a bounce already? One argument comes from outright yield levels in relation to pre-covid all-time lows and/or post-covid highs. They’re both in the same territory as recent highs in the lower 1.3% range. This inflection point could offer some support against rising yields. 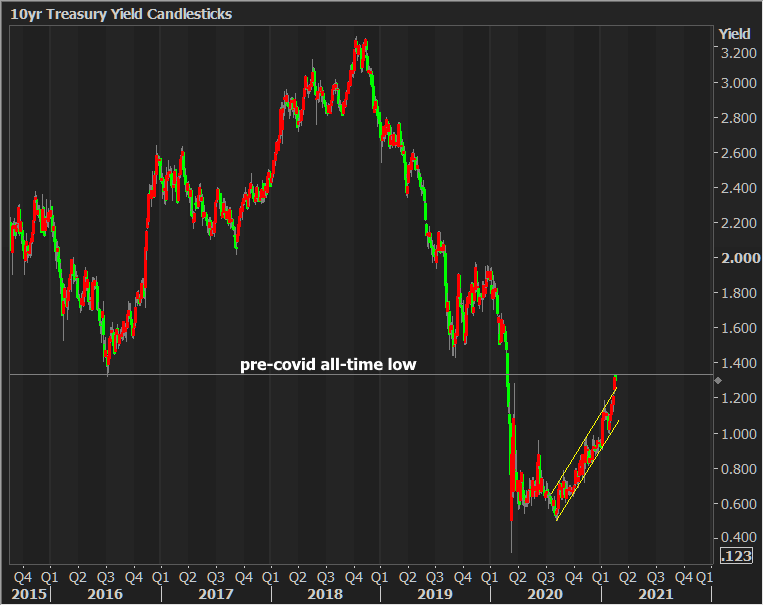 Moving away from outright levels and instead focusing purely on “momentum,” there is also a supportive case to be made.  Stochastics are one of the more mainstream methods for charting momentum.  They consist of two lines.  One measures where yields close relative to recent highs/lows over a certain time frame and the other is a simple moving average.  When the lines cross in certain regions of the chart, it’s considered a buy/sell signal.  In the chart below, when the lines are above the upper horizontal line, they are considered to be in “oversold” territory.  When the green line crosses below the teal line in that territory, it’s a buy signal.  Such signals have reliably coincided with friendly yield bounces, and it looks like we’ll get a similar cross today. 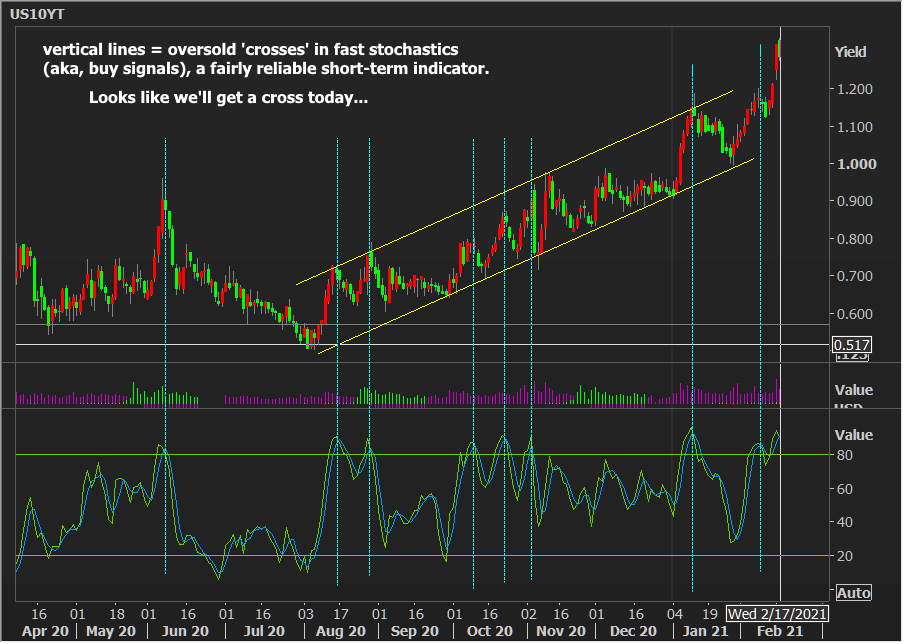 Lastly, we can get a sense for how the broader market feels about the recent run up in rates by checking in with stocks.  After all, the rate spike in late 2018 got a lot of credit for forcing stocks to top out, and the subsequent decline in stocks got some credit for helping bonds recover.  The same dynamic can play out on a smaller scale, as seen in the following chart. In other words, yields surged this morning and stocks didn’t like it. 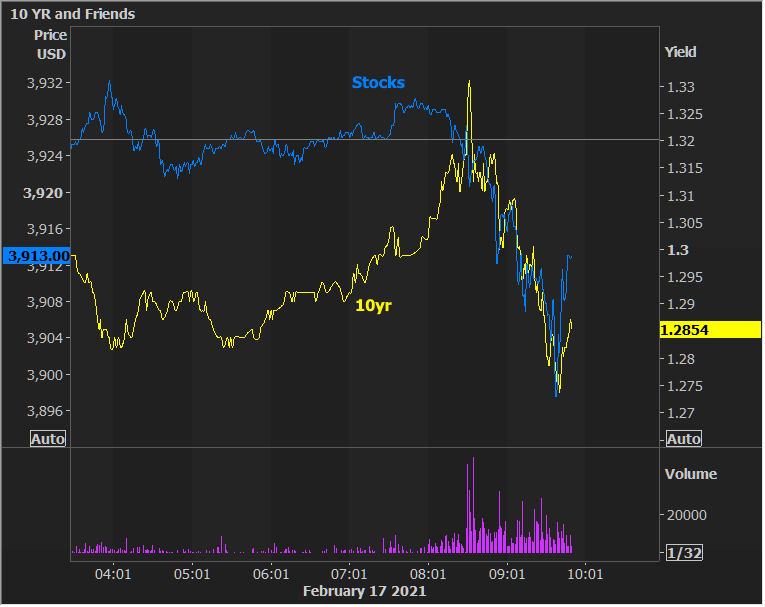 Zooming out just a bit, we can see the 1.32-ish supportive ceiling in 10yr yields overnight, as well as the pivot point offering resistance (aka “floor”) at 1.28%.  Breaking below this floor would be a solid cue for short-term gains.  Just remember that this is a rising rate environment in general and that bond rallies are best measured in hours and–if we’re lucky–days, not weeks and months. 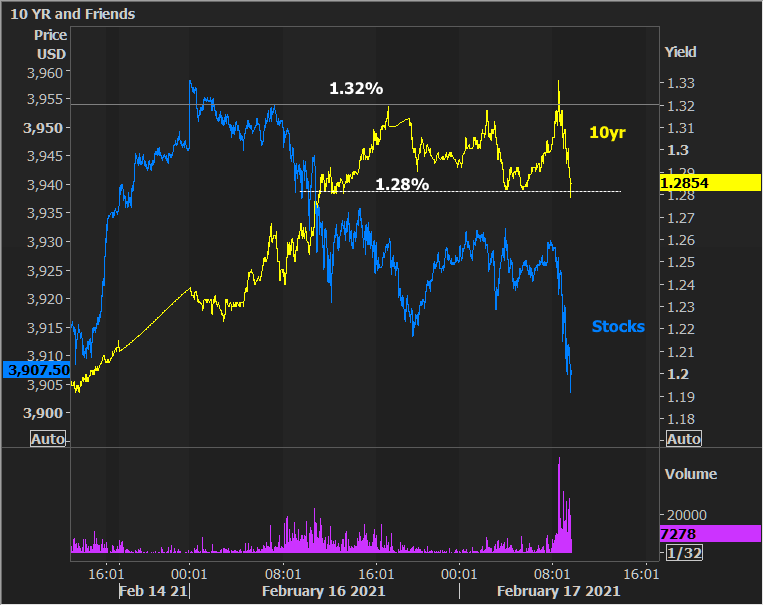