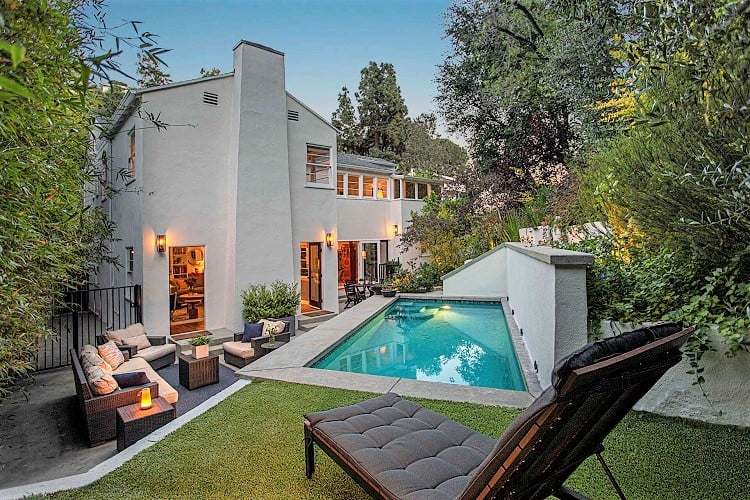 If you’re nostalgic for the Golden Age of Hollywood and want to capture part of the charm of the period, here’s a little something to take you back: legendary actor Burt Lancaster’s family home in Beachwood Canyon.

Lancaster, a four-time nominee for the Academy Award for Best Actor (with one win under his belt), starred in many iconic roles throughout his 45-year career in film and television. He’s best know for his roles in The Killers (1946) starring alongside Ava Gardner, From Here to Eternity (1953), Elmer Gentry (1960), and Field of Dreams (1989). The American Film Institute ranks Lancaster as #19 of the greatest male stars of classic Hollywood cinema.

The actor lived in a four-bedroom, four-bath home on Beachwood Drive, built back in 1941 by one of the city’s premier architects, Max Maltzman. Known best for his grand, high-style Los Angeles apartments and hotels, Maltzman had a very distinctive style which he imprinted on Lancaster’s traditional-style home.

Luckily, Maltzman’s design has gone largely untouched throughout the years, with no major exterior updates being made. The interiors, however, have undergone significant changes, to bring the property up to modern standards.

The home is currently on the market for $2.399 million, with Josh Myler and Jeff Kohl of The Agency holding the listing.

With a total of 2,800 square feet of living space, the Beachwood Canyon home has a large master suite with fireplace, and two additional bedrooms that open to a screened porch with lush hillside views, all located on the second floor. There’s an additional bedroom on the ground floor that can be used as a home office or gym.

The updated interior features a spacious open plan with great flow for entertaining, with multiple French doors opening the rooms of the house to the sunny outside — where you’ll find a private fenced backyard with mature trees, terraced gardens, and plunge pool.